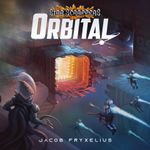 While I’ve been focusing on games released through traditional means the past few weeks, a number of crowdfunding campaigns have come and gone that might be of interest to you once the games hit the market. Here’s a sampling of those campaigns:

• Star Scrappers: Orbital is a re-working of Jacob Fryxelius‘ Space Station, one of the first releases from publisher FryxGames in 2011.

Over five rounds in Star Scrappers: Orbital, you add new modules to your starting core module, using your crew to take actions within those modules and repair them. At the end of each round, you score points for each of the six colors of modules for which you have the most. Publisher Hexy Studio ran a Kickstarter (link) for this new revised game in mid-November 2020, with delivery expected in mid-2021. 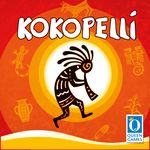 • Kokopelli seems like an atypical Stefan Feld design and a very typical Queen Games release, with the 2-4 players in this card game playing ceremony cards into the four spaces of their own village or onto certain spaces in neighboring villages.

In each game, you use twelve of the sixteen types of cards — with nine more types being available in the Ceremonies expansion. Each time you start a ceremony in your village, you gain the special power for that card as long as the ceremony is active. Each player has three copies of each type of card in their deck, along with a few jokers, and you need four copies of a card to “close” a ceremony and claim one of the point tokens for it, so you and your neighbors will sort of collaborate on closing ceremonies, but you want to be the one who finishes the job since only then will you score for it. Queen Games plans to deliver this title and expansion to Kickstarter backers (link) in June 2021, with the game hitting retail some time later.

• In October 2020, Indie Game Studios ran a Kickstarter (link) for Jason Dinger’s Crescent City Cargo from Spielworxx, this being the second title in Dinger’s “Cajun trilogy” following 2018’s Captains of the Gulf, a reprint of which could be acquired during this KS.

Here’s an overview of the game, which will be available only from Spielworxx, Indie Game Studios, the BGG Store, and Amazon prior to a possible release through distribution in 2023:
New Orleans, affectionately known as “the Crescent City”, is an important hub of commerce on the Mississippi River. The Port of New Orleans is a key conduit of imports and exports that are critical to the interconnected international economy. 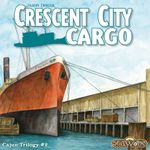 In Crescent City Cargo, players take on the roll of competing logistics companies vying to fulfill lucrative contracts with domestic railways, foreign cargo ships, and future speculated trade opportunities through shipping containers waiting to be loaded at the dock. Players receive goods from warehouses and use them to improve the state of their company or earn valuable capital that will serve to establish their dominance in the local trade market.

Logistics can be a cutthroat tactical environment as others vie to grab the best contracts before you can. Will you be able to manipulate the market, complete your goals, and in the end stand atop the competition as the most profitable company?
• Designer T. Alex Davis, who co-authored 2020’s Deep Vents from Red Raven Games is partnering with the publisher again for Rift Knights, an asymmetrical game for 2-6 players in which one side controls holy knights who must hold off demons until dawn while protecting elders, and the other side would be perfectly happy not to see those elders protected. Here’s a bit more detail about gameplay:
During the game, you choose a unique knight or demon, each with a variety of special powers, such as the Flame Knight’s ability to surround his foes in fire, or the Bone Crusher’s power to summon skeletal minions. You also play cards from your hand to perform actions each turn, and each card can be used in three different ways. Careful planning with these cards is rewarded with memorable, game-changing moments. A set of unique location tiles allows you to create the monastery with a different layout every game.
Although the Kickstarter campaign (link) had met its goal, Red Raven Games decided to cancel the project for now based on feedback from supporters and rejigger it for another go in the future. 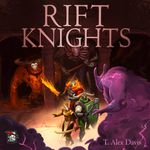 Tags: card, cards, each, game, games, link, players, their, your

Spread the loveby W. Eric Martin SPIEL ’19 is over, and (fingers crossed) all attendees have returned home or have purposefully gone elsewhere and aren’t merely stranded at airports. Con

Spread the loveby W. Eric Martin IMG 1 TT&bull When I noted within my SPIEL ’18 post-mortem at the end of October 2018, multiple game publishers endured thefts in that

Spread the loveby W. Eric Martin • U.S. publisher Renegade Game Studios has announced that effective immediately, its title will be available to hobby store retailers in the U.S. solely