I’m not sure whether it’s the “cold” weather in LA this week or the “shorter” days from daylight savings and winter approaching, but I can’t help but think of the holidays approaching. With that comes efforts to sneakily cleverly get family and friends into board games, and sometimes there’s no better way to do that than bust out a co-operative game. Here are a few 2021 co-op releases that I’m looking forward to trying:

• Cloudspire, Too Many Bones, and Hoplomachus have a new, futuristic sibling on the way! In mid-November 2020, Chip Theory Games launched a Kickstarter campaign (link) for its latest co-op release, burncycle from designers (and cousins) Josh and Adam Carlson.

Here’s a description of how it plays and the challenges you’ll face as your team of robots tries to take down those corrupt human corporations:
A puzzly infiltration game for 1-4 players, burncycle puts you in command of a team of robots in the far future. Their mission: taking down evil, human-run corporations responsible for subjugating AI under their heel. Your team arrives at each corporate headquarters and must sneak inside, shutting down the companies’ physical operations as well as their circuitous digital networks. As you search rooms and advance to the higher floors, you’ll be rewarded with new items and abilities, but you’ll also be challenged by threatening guards, fatal viruses, and the architecture itself, which was built to fight off robotic intruders.

Key to this solo and co-operative experience is the idea of “creative action sequencing”. During each round of play, all players contend with a randomly drawn set of programming directives that tell them in what order their bots are allowed to take physical, digital, and command actions. Players can choose to skip over directives at the cost of having an incomplete turn, or they can disobey the directions by paying costly action dice. The best players, however, find a way to work within the “burncycle” — essentially, organizing their actions so that they benefit the team while staying within the directive order.

Each of the corporate headquarters in the game uses a unique neoprene layout on a larger mat, changing the geography of the game to suit your target. Each CEO also has at their disposal a special threat meter, which will trigger new obstacles for your robots as time runs out. If you don’t complete the mission quickly, you may end up leaving bots behind, the victims of immobilizing power drains or destructive counterhacking.

Your team wins the game if you complete your objectives on every floor without losing your captain or maxing out your threat level.
More glorious premium poker chips, neoprene play mats, and custom dice, but with a new theme? Sign me up! 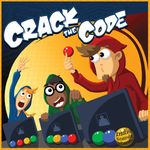 • Crack the Code is a limited communication, co-operative puzzle game from Sarah Graybill, John Shulters, and Indie Boards & Cards that’s being funded on Kickstarter (link) ahead of a planned release in the first half of 2021.

In slightly more detail, each round you action cards available equal to the number of players plus one, and each player must choose a different action card to use and discard, with the final card being left on the table for the subsequent round. The game will also include a campaign mode.

• Sub Terra II: Inferno’s Edge is a 1-6 player co-operative adventure game with some strong Indiana Jones vibes from Inside the Box Board Games designed by Tim Pinder and Rose Atkinson.

As a standalone sequel to Pinder’s 2017 hit, Sub Terra, Inferno’s Edge features a new objective-driven puzzle to solve; ten new specialized explorers, each with a unique style of play; more monsters and more ways to fight back; and a thrillingly explosive finale.

Here’s a more detailed overview of the heated situation awaiting you:
Sub Terra II: Inferno’s Edge is a co-operative adventure board game. You and up to five friends must explore a tile-based volcano temple to steal a legendary artifact. To get it, you must find the path to the inner sanctum, unlock the secrets within, then escape the way you came.

This is a dangerous place. You need to work as a team to avoid deadly traps, brave scorching lava and defeat the temple’s mysterious guardians. Stick together to share your skills, or split up to cover more ground, but be aware that the volcano stirs beneath you, and you’re running out of time…

In Sub Terra II: Inferno’s Edge, players progressively reveal new tiles, forming the board and mapping the volcanic temple from its sunlit entrance to its fiery core. As players explore the temple, they have to overcome obstacles, avoid hazardous terrain, and face the ferocious guardians of the “artifact”. After a player takes actions on their turn, a random hazard activates, making careful planning of actions essential to survival.

Players must collectively locate and obtain 3 “keys” — mysterious objects that are needed to gain entry to the chamber containing the legendary artifact. Your adventures must be quick, though, as the volcano stirs and as the game progresses you get closer to the volcano erupting, flipping tiles to completely inhospitable lava flows that will chase the adventurers from the cave.

Tags: action, each, game, must, players, team, their, they, your

Spread the loveby W. Eric Martin • A lot of game information passes through my hands, often for titles that I’ll never think of again once I write or tweet

Spread the loveby W. Eric Martin Gen Con and SPIEL have cancelled their events for 2020, with both organizations promising to hold online conventions during the days when their shows