Designer Diary: Gorinto, or Five Facts about Indonesia — #5 Will Surprise You 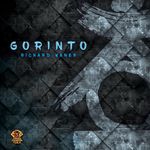 The story of Gorinto begins in the far-off land of Indonesia. Mike Fitzgerald, a brilliant designer and a wonderful human, was asked by a publisher to design a game about Indonesia and reached out to me to ask whether I was interested in co-designing the game with him.

I began my design by researching Indonesia, since I didn’t know anything about it other than I was pretty sure it was an island. Now, thanks to my research I am as much of an expert about Indonesia as an hour of googling can get you and learned that even the one single fact I had about Indonesia was wrong. As it turns out, Indonesia is not an island; it is made up of 18,307 islands. (To be fair, I was only off by 18,306.) Indonesia also happens to be one of the most biodiverse areas in the world. These facts led to my first draft of Gorinto, an island-based game about gathering some of Indonesia’s unique items.

With my newfound expertise on Indonesia, I want to share two fascinating facts about Indonesia:

• The residents on one of the islands of Indonesia file down their teeth. This practice is rooted in the belief that the six main vices — anger, confusion, jealousy, drunkenness, desire, and greed — all enter the body through the top six teeth. By filing away the teeth, the vices are thwarted.

• One of Indonesia’s stranger exports is Kopi Luwak (Cat Poop Coffee), which is the world’s most expensive beverage, costing around US$1,000 per pound.

I sent Mike a list of all the facts I had found, and he suggested a mancala-based game — since you may not be as knowledgeable about Indonesia as me, Mancala is popular in Indonesia — in which at the end you have to have a tooth filed down. Luckily, I didn’t playtest this idea, although being vice-free sounds wonderful. 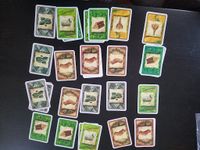 First version pattern card
Originally, players always took the full pattern regardless of how many cards they had already collected of a type. To take a turn, players took one card in the grid and moved it anywhere in its row or column. Additionally the game had only a single way to score. At the end of the game, players earned two points for whatever good they had the fewest of and one point for every card they had the most of. (This scoring did still make it in as one of the Gorinto scoring methods.)

After a few playtests, I set out to show the game to Mike — only to discover that he had lost contact with the publisher and was going to work on other projects.

No longer tied to the Indonesia theme, I set out to find another system that had five objects and ran into Godai, the five-element philosophy of Japanese Buddhism. Although at the beginning, I thought “Godai” worked as a Japanese word in English and would be a good name for the game, it carries the unfortunate suggestion that you should “go die”. Very quickly the publisher brought this fact to my attention since that is the last thing we want people interested in my game to do, and after another hour or so of googling Gorinto was born. To save you the effort of having to look it up, a “gorinto” is a five-tier pagoda representing the five elements.

After a playtest with the Colorado Game Designer’s guild, one of the designers offered to demo my game to Marc Specter, the owner of Grand Gamers Guild. That is how the game got signed.

What the game looked like when Marc saw it
Originally, I was strongly considering kickstarting Gorinto myself, so I did everything in my power to keep the game as small and the components as light as possible. With the support of a publisher, Gorinto no longer needed to be kept tiny. Along with suggestions from the company, Gorinto began growing into the full game it is today.

As a great philosopher once said: “You should begin your journey at the end, then the beginning, then the middle, then the end again.” Actually nobody wise ever said that, but that is the path Gorinto’s development followed.

The first major change and request from Marc was to create multiple endgame goals. Everybody likes replayability, and completely changing the scoring each game was a wonderful way to make this happen.
To create even more diversity between games, we decided to have two goals to score each game and added scoring for one of the five elements as a third goal. At this phase, the game still only scored at its end.

After more playtesting, we found that in the early game players didn’t have any particular reason to make one move over another; they just took random moves for the first few rounds before starting to work toward their goals. Early game heuristics at this point mainly consisted of “I like fire” and “Water is pretty” — not quite the strategic depth I was looking for.

To fix this issue, I came up with the idea of having a player gain tiles based on the number of tiles they already had of a type. This change added a tiny bit of engine building to the early game, giving players decisions to make in the early game. With this change in place, the “I like rocks” heuristic decreased greatly in popularity.

At this point, the game had an arc with which I was very happy. In the early game, you are building up the ability to get more tiles later. Midgame, you are focusing on getting all the tiles you want. Late game, you are trying to get what little you can without messing up any of what you already have.

During a playtest of these new mechanisms, fellow designer Heather Newton came up with the idea for the paths, that is, spaces along the edge of the board where tiles are added. Instead of moving a tile from anywhere on the board horizontally or vertically, the path tiles are dealt at the start of the round and may move only down their line. Adding paths to the board added a bit more strategy to a heavily tactical game. With the ability to know the usable tiles in the round, it became possible to plan a little bit better.

Since the paths forced the game to have rounds, I set out to explore the new game structure and discovered that having scoring occur at the end of each round added a lot of interesting tension to the game. With scoring at the end of the game, you had tension only at the end when you had to have the correct scoring. With scoring each round, the tension occurred more often since you had to keep your scoring methods working throughout the game. This also added trade-offs between getting points in early scoring rounds and building your engine to set up for future scoring at the end. 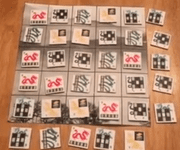 Paths — and a brief foray into an elemental dragon theme
The End: Part II

The final thing I had to fix was what to do about the new runaway leader issue this new scoring created. The solution to this was to have the element scoring occur only at the end of the game instead of during each round. This served to do three things:

• First, it helped to obscure who the winner was until endgame.
• Second, it allowed for surprise comebacks at the end and surprising finishes.
• Third, the element scoring was a large part of the runaway leader issue. Whereas the other scoring methods grow and wane if you aren’t careful, the elements gathered scored over and over.

With these changes in place, we added the second element scoring card to make the element end game scoring more predominant.

One of my favorite things to do in Gorinto is to gather as many of the endgame scoring elements as I can for a big endgame comeback. I try my best to do this whenever I demo Gorinto to people. This way I snatch victory from my unsuspecting victims muahahahahahahah. This is why I am such a poor salesman.

At this point, the mechanisms of the game were complete, and the only thing left to do was to balance the endgame goals. Since all the players are scoring the same goal, balance was less important in Gorinto. However, I wanted to make sure that the goals were close enough in value that players couldn’t just ignore one. I didn’t want one scoring method to dominate a game. I wrote a simple program capable of playing my game and did some rough balancing of the goals from the data my program gathered. Once I had my roughly balanced goals, I did more human playtesting to try my new goals and had to adjust a few of the values. Most of the goals could be balanced. A few were just too strong, so they had to be removed.

Below is a printout of some of the goal-balancing information my program managed to gather. I am aware that it looks like complete gobbledygook, but trust me, it is fascinating!

And with that, the story of Gorinto comes to a close and as the development went End, Beginning, Middle, End, now we will go back to the beginning and end with one final Indonesia fact:

• In Indonesia, Pasola is a harvest festival in which two teams of spear-wielding horsemen gallop at each other, hurling their spears at rival riders.

Spread the loveby W. Eric Martin • I started exploring the world of designer games in 2000 and 2001, thanks partly to me attending Mensa Mind Games. (I was a

Spread the loveby W. Eric Martin • In February 2020, U.S. publisher The Op announced Scooby-Doo: Escape from the Haunted Mansion from Jay Cormier and Sen-Foong Lim that was labelled

Spread the loveby Josep M Allué In addition to designing 3F (fun/family/filler) games, I like science and magical effects, which means I really like scientific experiments that surprise you and