Drive a Bus with Dice, Make Eight Cards Ten, and Crush Others with Blocks 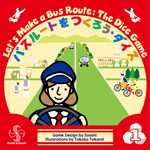 • As the COVID-19 vaccinations continue to roll out in countries around the world, Tokyo Game Market is one of the few game events taking place, with TGM next taking place on April 10-11, 2021.

Let’s look at a few titles that will be available at that show, starting with Let’s Make a Bus Route: The Dice Game from designer Saashi (of Saashi & Saashi), with this being a reimplementation of 2018’s Let’s Make a Bus Route that plays with 1-2 people. Here’s how it works:
In Let’s Make a Bus Route: The Dice Game, each player is a member of a bus company and creates bus routes by drawing lines on a map. You want to meet the needs of each client — tourists, commuters, local university students, the elderly, and parents with children — while also considering congestion and traffic conditions. Who can create the bus route that pleases the most passengers?

In more detail, the game lasts 24 rounds, with you being the start player for half of those rounds. On a turn as the start player, you roll the six white dice in the game, then choose three of them, with the other player taking one of the remaining three dice. With the die results, you mark spots on the game board with an erasable pen to extend your bus route and pick up and drop off passengers. With bonuses, you can re-roll dice or roll an extra black die. After deducting traffic (and other) penalties, the player with the most points wins.

The game includes two maps: On the City Map, you must be mindful of the river as its bridges restrict your course at various points of the map. On the Mars Map, you can warp from one corner of the map to one of the other three corners, continuing your route across vast distances!

Let’s Make a Bus Route: The Dice Game includes a solo mode that features mostly the same rules. The challenge is that you play the game twice on the same map with different colored markers, and re-using the same road in the second game causes traffic and negative points. How well can keep the routes separate to cover ground and make the most happy customers.

The original• At the Osaka Game Market in late March 2021, Saashi & Saashi released a new edition of its jazz-themed, trick-taking game Take the “A” Chord, with larger components, revised rules for three-player games, and new rules for two-player games. Here’s an overview of how it works:
Take The “A” Chord, a.k.a. Aコードで行こう, is a trick-taking card game in which players become jazz musicians and compete in the strength of the chord.

Cards come in five suits (colors) labeled A-G, and in a trick, you must play a card of the same suit led — unless you have a card in the same letter as a card previously played, in which case you can play that. Why would you do that? Because initially the highest-valued letter in the game, e.g. C, is determined randomly, with the other cards being ranked lower in C in order: C is higher than D, which is higher than E, etc. with G higher than A. When you play the same chord — that is, letter — as another player, you make that chord the new highest-valued letter for subsequent tricks. 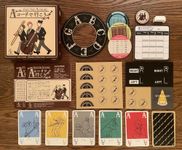 Components in the 2021 edition
What’s more, if you play the same chord as the player who started the trick — that is, if you improvise — not only do you change the highest-ranking chord, that trick goes unresolved and you start a new trick with the winner of that trick taking all tricks played since multiple instances of improvisation can take place.

You score a bonus for improvisation, but you don’t want to take too many tricks in a round as that will cost you points in the long run. Score well, lead the band, then step aside for others to (possibly) take things too far. After multiple rounds, the player with the most points wins.

• Another title that debuted at the Osaka Game Market and will be available at the April 2021 TGM is Death Cube from Susumu Kawasaki via his company Kawasaki Factory. Here’s how to play this 2-5 player game
In Death Cube, you are trying not to be crushed by blocks — or to crush people with blocks — depending on your role that turn.

The game takes place in a 4×5 grid that bears the numbers 1-20. Each turn, five spaces are covered on this grid based on whichever of the forty puzzle cards is chosen at random. If you are the “organizer”, you are then presented with two pentominoes — i.e., five connected cubes — from a set of five pentominoes, and you have 24 seconds in which to decide how to fit these two pentominoes into the remaining 15 spaces of the grid. (The two are chosen at random from four possible choices, which means the game includes 160 total puzzles.) 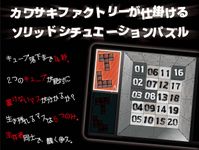 If you’re not the organizer, then you are a “participant”, and you want to find a safe square among those 15 spaces where you will not be crushed by a block. Some squares will definitely be safe based on the pentominoes in the challenge, whereas other squares will be safe only depending on how the organizer decides to place the blocks. When you’ve made your choice, grab the numbered tile matching your chosen space so that no one else can take it. 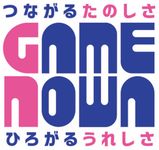 • I’ll wrap this post with one of the “card games with numbers” that I always find so appealing, with ツクルテン (Tsukuruten) from designer Kenichi Kabuki and publisher Game Nowa featuring rummy-style play with the 2-4 players needing to create sets and runs for multiple reasons. Here’s an overview of the game, which debuted at the Osaka Game Market:
You score points in the round if you can add up the eight cards in front of you to sum to 10. This challenge is complicated by the deck containing eight cards each of numbers 1-7, with half the cards being red and half blue — which means almost every set of eight cards will sum to more than 10!

The trick is that certain combinations of cards are worth less than their face value:

Each player starts with a hand of eight cards. On a turn, draw a card from the deck, then (if you don’t have a sum of 10) discard a card in a row in front of you; alternatively, you can pick up the discarded card of the player before you, add two cards from your hand to this card, play it beside you as a special sequence (a “get”), then discard a card. The cards in that “get” cannot be altered for the remainder of this deal, but they still count as being in your hand toward the desired sum of 10.

The cover depicts a winning hand; can you see it?
When someone does reach a sum of 10, whether by drawing a card or picking up a discarded card, the round ends, with players scoring points based on the combinations they’ve made and certain conditions in their hand. Having only one 7 in hand is worth 1 point, for example, as is having four red and four blue cards, whereas having all cards of one color or two triples are each worth 3 points. You also score points for being the one to end the round.

Play enough rounds so that each player starts a hand twice, then whoever has the most points wins. Alternatively, if a player collects a “God Ten” — that is, all eight 2s or all eight 5s, each of which sums to 10 — they win the game instantly!

Spread the loveby W. Eric Martin • Having experienced both Virtual Gaming Con and Gen Con Online, designer Gil Hova details what didn’t work in these virtual cons and what

Spread the loveby W. Eric Martin In January 2020, I posted about the founding of Unexpected Games, a new studio under the Asmodee umbrella “centered around innovative design and spearheaded

Spread the loveby W. Eric Martin • DeepMind, the AI research and development company behind the AlphaGo AI that mastered Go, is now attempting to train an AI how to