• Flatout Games — the game design collective comprised of Molly Johnson, Robert Melvin, Shawn Stankewich — has a new title coming in 2021 with publisher AEG, which has worked with Flatout previously for the card games Point Salad in 2019 and Truffle Shuffle in 2020.

This new title — TEN — is for 1-5 players, is due out in Q3 2021, and currently features this minimalist description:
TEN is an exciting push-your-luck and auction game for the whole family! Players draw cards one-at-a-time, trying to add as many as they can without exceeding a total value of TEN, or they bust! 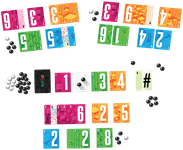 Players may push their luck to draw more cards and use currency to buy additional cards in their attempt to build the longest number sequence in each color. When valuable wildcards emerge from the deck, players compete in auctions to obtain them in order to fill gaps in their sequences. 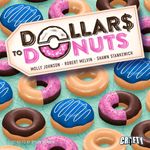 • Two other titles designed by the Flatout team of Johnson, Melvin, and Stankewich will be released in 2021 by U.S. publisher Crafty Games.

Dollars to Donuts was funded on Kickstarter in August 2020 and is due out Q3 2021, and you have to live up to the title of this 1-4 player game because in the end dollars mean nothing and donuts are everything:
Donuts must be made whole! That’s the spirit driving your actions in Dollars to Donuts, mostly because the customers in your donut shop will not want to purchase half-donuts that will undoubtedly be stale on their open ends.

To set up the game, place four 1×1 starting tiles on the 6×6 game board that represents your donut shop and take five “dollar” tiles from the bag; on their back side, dollar tiles have either a half donut (plain, chocolate, sprinkle) or a set of donut holes (again in the three flavors). The starting tiles depict half donuts in these three flavors

On a turn, you can purchase a 1×4 donut tile that depicts half donuts along its edges from the six available tiles for a cost of $0-5. You then add this tile to your shop — with some of the tile hanging off the edge of the board if you wish — ideally lining up the half donuts on that tile with those already on your board. If you make a matching donut, i.e., putting two sprinkle halves together, then you take a sprinkle scoring token; if you make a non-matching donut, i.e. a plain half combined with a chocolate half, then you draw a dollar tile from the supply bag. Note, however, that jelly donuts give no dollar tile if paired with a non-jelly donut because who in the world would reward something like that?

To end your turn, you can place a dollar tile on your shop board to complete a donut (and score) or fill a space with donut holes (which might also score). Additionally, you can serve a customer in line by offering them scoring tokens that match their desired donuts, which will earn you more points than the tokens on their own.

When one player has filled every space in their shop or the donut tiles run out, the game ends, with you scoring for satisfied customers, neighborhoods served, donuts still on hand, and donut hole pairs in the shop, while losing points for empty spaces in your shop. The player with the highest score clearly has the most popular shop in town!

• The other Flatout title from Crafty Games is Abstract Academy, a game for two or four aspiring art students who must share a canvas for their creations:
Abstract Academy is played over three rounds, with the players completing a new canvas each round. 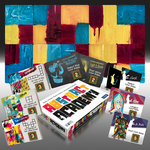 In the two-player game, players take turns playing canvas cards into a shared 4×4 play area, and in the four-player game, they play in a shared 5×5 area. Canvas cards are divided into quadrants, and each quadrant is colored yellow, red, or blue. The canvas grows organically as you all play cards, and the edges aren’t fixed until you have four (or five) cards in a row or column. The edge of the canvas closest to you is your home row, and once the canvas is locked in size, no one else can play in your home row (unless all other spaces are filled).

Once the canvas is filled, the two rows closest to you form your scoring zone. If the color patterns in your zone complete a scoring card better than the patterns in anyone else’s zone, then you claim the scoring card. Additionally, if you’ve created the right pattern in your scoring zone, you can score your inspiration card. Whoever has the most points after three rounds is the star pupil of Abstract Academy and wins!
• Aside from designing and developing games, the Flatout team also publishes them, with Randy Flynn’s Cascadia having been funded on Kickstarter in Q4 2020 with delivery expected in Q3 2021. Here’s an overview of how the game works:
Cascadia is a puzzly tile-laying and token-drafting game featuring the habitats and wildlife of the Pacific Northwest.

In the game, you take turns building out your own terrain area and populating it with wildlife. You start with three hexagonal habitat tiles (with five types of habitat in the game), and on a turn you choose a new habitat tile that’s paired with a wildlife token, then place that tile next to your other ones and place the wildlife token on an appropriate habitat. (Each tile depicts 1-3 types of wildlife from the five types in the game, and you can place at most one tile on a habitat.) Four tiles are on display, with each tile being paired at random with a wildlife token, so you must make the best of what’s available — unless you have a nature token to spend so that you can pick your choice of each item. 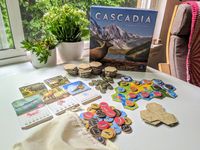 Prototype copy
Ideally you can place habitat tiles to create matching terrain that reduces fragmentation and creates wildlife corridors, mostly because you score for the largest area of each type of habitat at game’s end, with a bonus if your group is larger than each other player’s. At the same time, you want to place wildlife tokens so that you can maximize the number of points scored by them, with the wildlife goals being determined at random by one of the three scoring cards for each type of wildlife. Maybe hawks want to be separate from other hawks, while foxes want lots of different animals surrounding them and bears want to be in pairs. Can you make it happen?
• Finally, we come to Verdant, a design by Johnson, Melvin, and Stankewich along with Aaron Mesburne and Kevin Russ that Flatout Games will Kickstart in 2021 ahead of a planned release in 2022. For now, we have only a general description of the game, which seems to fit in the same category of games as Dollars to Donuts, Cascadia, and Flatout’s 2020 runaway hit game, Calico:
Verdant is a puzzly spatial card game for 1 to 4 players. You take on the role of a houseplant enthusiast trying to create the coziest interior space by collecting and arranging houseplants and other objects within your home. You must position your plants so that they are provided the most suitable light conditions and take care of them to create the most verdant collection. 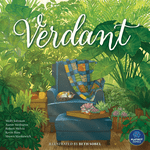 Art by Beth Sobel
Each turn, you select an adjacent pair of a card and token, then use those items to build an ever-expanding tableau of cards that represents your home. You need to keep various objectives in mind as you attempt to increase plant verdancy by making spatial matches and using item tokens to take various nurture actions. You can also build your “green thumb” skills, which allows you to take additional actions to care for your plants and create the coziest space!

Spread the loveby W. Eric Martin In July 2018, Stephen Buonocore of Stronghold Games tweeted about the “(not-officially-announced) ‘Core Worlds: The Board Game'”. In December 2018, I posted about the

Spread the loveby W. Eric Martin • Let’s run through a few game-based Kickstarter projects in this post, starting with Reality Shift by Mat Hanson and Academy Games, which leans