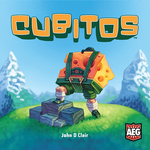 No matter how many times I think I’m ready to talk about a game, I always come up with more to say after I’ve locked my thoughts into a write-up or video. This happened again most recently with Cubitos, a John D. Clair design that U.S. publisher Alderac Entertainment Group released in February 2021.

I had played Cubitos four times on a review copy from AEG at the end of 2020, put the game aside when BGG’s GameNight! released a video overview in January 2021, then revisited the game for two more plays in May 2021 before recording a video overview of my own, included below.

Then I discovered more to say, which I’ll include below, only to fall short of whatever comes to mind after this post goes live. 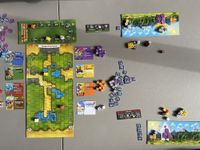 Cubitos is ostensibly a racing game in which each player starts with the same set of lousy dice and tries to use these dice to reach the finish line first. Seven of your starting dice (the light gray ones) show only a single coin on one side, while the other two (dark gray) feature one coin, one foot — the currency used for movement in the game — and four blank sides. You’re not going fast anywhere with that assortment of dice, so you’ll need to use the coins to buy better dice.

Eight colors of dice are available for purchase, and the effects of the faces on a colored die are generally determined by the associated card in play for that particular game. (Some colored dice have feet and coins on their faces, and those abilities remain the same from game to game.) The rulebook includes seven suggested races to show off all the different cards in the game, but you’re free to choose cards at random.

The game also comes with four racetrack game boards, and each track has its own assortment of bonus spaces, shortcuts, and (somewhat) inaccessible water terrain. 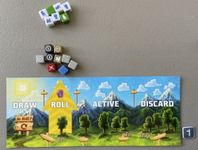 On a turn, you roll some number of dice, with a baseline of nine and with you rolling more dice if you have gained fans, have fallen behind the leader, or have a die power that lets you break the rules. In the image above, for example, I used a red power on my previous turn that allows me to roll white and green dice in the current turn without them adding to my total. Look at all those feet! Well, potential feet. I haven’t rolled those dice yet, so those feets might fail me now.

When you roll dice, you move non-blank results — i.e., hits — to the “Active” area, then decide whether you want to roll again. If you have at least three active dice and roll nothing but blanks, then you’ve busted for the turn, receiving only a notch on the fan track as consolation. Apparently they admire your willingness to try.

If you stop without busting, then you use feet to move — spending four coins as a foot, if you wish — after which you can buy at most two dice of different colors, placing those new dice and all used dice in your discard area.

As is customary in pool-building games such as Dominion, Ascension, and The Quacks of Quedlinburg, over time you hope to lower the percentage of garbage in your pool of resources and instead have things that will fuel you to success.

What’s curious about Cubitos compared to other racing games is that often you have no desire to go anywhere. Instead you might choose to bounce between bonus spaces on the game board as my opponent John was doing in the image above. He hit the “gain two fans” space, then the “lose two dice” space over and over again, trimming the fat and replacing it with blocky, colorful muscle while I foolishly(?) moved ahead on the track like someone who was in a race.

This aspect of gameplay is similar to what happens in Dominion, with you typically trying to shove as much gas as possible into your deck before you start racing for valuable (yet useless) victory point cards that will run out. Dominion isn’t a racing game, but it has a racing feel since VP cards are limited and you need to accelerate the “right” way so that you don’t bog down before players hit the collective finish line of an empty VP deck.

Where Cubitos differs from other pool-building games is that everything you have is visible. In Dominion, Quacks, et al., when you acquire new stuff to juice your engine, that stuff goes into your deck or your bag, and no one knows when it will appear in the future. You can be surprised by what you draw and what your opponents draw. With Cubitos, your choices are all out in the open. I can see all the dice you bought, and I know what you’re rolling on a turn and what’s sitting on the side. I’m not surprised by what you might do, only by the specifics of what you roll — but I’m possibly not even paying attention to that since for the most part, we roll dice simultaneously and what I roll almost never affects what you can do.

What’s more, what I do on the track doesn’t affect you either. Unlike in most race games, in Cubitos you can occupy the same space as someone else. We’re effectively ghosts who just happen to be racing one another as the only two ways we interact are via the red dice that reward whoever has the most symbols on a turn and the limited colored dice pool that might run out. (I’ve played only two- and three-player games, so admittedly dice shortages would probably be more of an issue with four players.)

The only time we stop trying to be clever with the dice combos and pay attention to one another is typically in the final quarter of the track when someone might be able to reach the finish line. Only then do we slow down and force players to roll in player order, typically to see whether the leader crosses the line and we need to push hard to catch up. Only then do we stop being ghosts and realize that other people are at the table. I wish the game did more to push us into one another’s way because sometimes the most memorable moment of a race isn’t who crosses the finish line first, but the unexpected Budd-Decker-style interactions that happen along the way.

For more thoughts on the game, including my take on the game’s storage system, check out this video:

Spread the loveby Candice Harris In August 2020, Eric Meyers from WizKids demoed a couple of its upcoming 2020 releases for me on Tabletop Simulator. I had the pleasure of

Spread the loveby W. Eric Martin UK publisher Osprey Games has announced a pair of card game releases for May 2021, these being Imperium: Legends and Imperium: Classics from the

Spread the loveby W. Eric Martin Despite Gen Con 2020 being an online event that required me to travel only to the recording studio on the top floor of my