Game Overview: Musical Chairs, or Ride the Beat to the Best Seat 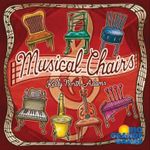 In April 2020, designer Kelly North Adams presented an origin story for the game Musical Chairs and how it came to exist in its final form courtesy of Rio Grande Games. Today I’ll present an overview of how the game plays.

A game like Musical Chairs highlights the difficulty of maintaining the BGG database. The gameplay has a press-your-luck element to it, but I’d never think of this as a press-your-luck game along the lines of Diamant. The design has a quasi-set-collection element, but if I were rating that aspect on a scale from 0-5, I’d give it at most a 0.5. The BGG game page lists “movement points” as a mechanism, and I guess that’s true in a way, but it’s unhelpful when thinking about the nature of the game.

Better that I get into a few details so that you can come to your own conclusion: Your goal in Musical Chairs is to score points than the other players, and you score points primarily by claiming valuable seats over the course of the game — but knowing which chairs will be valuable at the end of a round is tricky.

Each player starts with a hand of eight cards, and on a turn you probably play a card to the center of the table on a generally ascending pile of cards. Cards come in eight colors that match the eight chairs on the game board, with each color having cards numbered 1-10 and a “rest” symbol, specifically a quarter rest, a.k.a. a crotchet rest.

Whenever you play to this pile, you move your pawn 1-3 spaces clockwise around the game board. When a player can’t play or chooses not to play a valid card, then the music (a.k.a. the round) stops, and everyone scores for the chair in which they’re “sitting”, i.e., you claim all of the played cards of the color of the chair next to your pawn. Additionally, you can score all cards of this color from your hand that have a lower value than the highest value card that you claim. If you collect a blue 6, for example, you can score any blue cards valued 1-5 from your hand. (You can also score the blue “rest” card, but that’s not clear initially as the rules state that you can score “Chair cards” in this situation; a FAQ in the rulebook mentions that a rest can also be scored.)

On top of this, for the highest-valued card played in that round, you remove the cushion from the chair of the same color and place it beside the game board. If that cushion has already been removed, then you go to the next highest-valued card, and so on. Any player standing next to a cushion that’s been removed from the game board can remove one card from their score pile to claim it. Cards are worth 0-3 victory points (VPs), and cushions are also worth 0-3 VPs, but each cushion has a unique special power that you’ll almost certainly want to claim.

If you have a rest card, a repeat card, or a card of the same value as what’s on top of the pile, you can play any of those cards instead. For the rest card, place it in front of you and don’t move your pawn because you are literally resting. For the repeat card, play it on the pile, with this card taking on the characteristics of whatever the top card is. For a card of the same value, you play it on the pile, and for both this card and a repeat card, you move your pawn 1-3 spaces.

As a result, sometimes your turns are forced, and sometimes you have choices. You want to end up in a valuable chair at the end of a round, ideally one that will allow you to score cards from your hand, but sometimes you can’t play the cards you want because they’re either too low or too high, and sometimes you can’t play at all because someone else ended the round. These possibilities make it difficult to assess your hand and where you want to land on the board because at the start of the round, your hand is only potentially playable and all the colors are (usually) worth the same thing: 0 points. (If a removed cushion hasn’t been claimed, then you can purchase it if you end the round next to that space, so a cushion can make a color desirable even if no cards of that color have been played.)

Each round has an intriguing flow to it, and you wing it as best you can, sometimes playing a rest with the hope that others will play cards to create valuable targets for where to move and sometimes with the hope that the round will end before you have to play again, thereby letting you squat on a point-heavy seat. If you have a 10 in hand, you might try to time your moves to end on that color when you play that card, but again sometimes the round will end before that time and sometimes the values won’t rise as quickly as had hoped, so you’ll be forced to play more cards and skip that color. 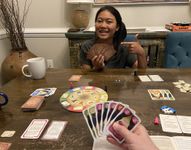 I’ve played Musical Chairs three times so far, twice with two players and once with four, on a review copy from Rio Grande Games, and I’m still not sure how to assess a hand. Maybe that’s what is intended, with you winging it and a plan coming together over the course of a round, but maybe not. Maybe I need more experience to figure out how to estimate how a round might play out, similar to how you need lots of experience with trick-taking games before you can reasonable estimate how many tricks you might win.

Player count matters a great deal in the game, as with two players only one person plays between your turns, giving you a better approximation of what you might play and how far you might travel. With four players, you might have a string of three 1s followed by two 2s and a repeat, or the central pile might jump from a 4 to a 6 to a 9 to the end of the round. I’ve experienced both of those situations.

Another aspect of play comes when you share a seat with someone else at the end of a round. You can’t split the points, so you must engage in a butt battle with them. To do so, each of you chooses a card from your hand and plays them simultaneously, with the higher-valued card claiming victory. If you tie — and a repeat card played will force a tie — then you each play another card until either someone wins or you both lose. Butt battle losers get nothing, and you can’t always choose when to fight since another player might land on your space. You can hope to prepare for a battle by saving high-valued cards, but you might also be forced to play them, leaving you defenseless.

The game ends either after the final cushion has been removed from the board or if players can’t refill their hand to eight cards at the end of a round. This latter condition was nearly triggered in our four-player game thanks to many more cards being scored and removed from play, but it’s unlikely to happen with only two players.

I’m eager to try out Musical Chairs with more players — specifically experienced gamers who don’t live in my household — to get a better sense of what’s possible and what’s practicable given your starting hand, but that situation will come only in some future month unknown to me, so for now I have to keep moving, pointing to this video overview along the way should you care to learn more about the game:

Spread the loveby Banana Chan It’s currently Saturday night, a couple of hours after a Friendsgiving day full of creamed ham and playing the fifth round of a game I

Spread the loveby Ted Alspach The card game Silver was almost named Silver Bullet. During development of Silver, once I determined that I wanted a silver token in the game,