The Unlock! series of escape room games from Cyril Demaegd and Space Cowboys has had huge success since it debuted in February 2017, being beat to market by only a few months by the Exit: The Game series of escape room games from Inka and Markus Brand and KOSMOS. Apparently everyone wanted to escape from things starting in late 2016, and the trend hasn’t stopped yet.

Space Cowboys has released eight Unlock! collections, with each collection having three independent “escape room” scenarios, and now the publisher has grabbed one of the IP granddaddies on the market to release Star Wars: Unlock!, a trilogy of escape room scenarios set in a galaxy far, far away, with Jason Little providing design work.

Each of the scenarios puts you in the role of one of the three Star Wars “factions” — Rebels, Imperial forces, scum & villainy — and you’re given a lodestar mission and a few details on the situation, then placed on a bantha that’s slapped and sent on its way.

The scenarios all use the Unlock! game engine: You combine blue and red objects by summing their numbers, then seeing whether the sum matches a card in the deck; you use machines by entering their number in the Star Wars: Unlock! app that you must download, then doing…something; and you must find four-digit codes to get you past certain obstacles and make your final escape. You’re confronted by logic puzzles and observation puzzles of all types, with the app providing hints as needed as well as challenges that would be difficult or impossible to present in a paper format.

I know some folks hate games that require apps, but some designers are using them in smart ways to provide an experience you couldn’t have otherwise. That said, while the box lists this game for 1-6 players, you will need at least two players to complete one of the challenges in scenario #2 in the manner intended. (If you’re playing solo, you’ll get the answer immediately and miss out on silly app fun.) 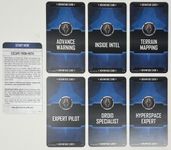 Starting cards for “Escape from Hoth”; choose three advantage cards to get clues for future puzzles
Knowledge of Star Wars is not required to play out these scenarios, but if you have it, you’ll likely lean on that knowledge in ways both good and bad. In the second scenario, you’re searching for your astromech droid (among other things), and the person I was playing with said, “Well, if you have an astromech droid, that means you probably need to [INFORMATION REDACTED].” His assumption was correct, which probably saved us time getting past a certain obstacle.

In another scenario, however, we had a vehicle, and I thought, “Oh, we can just use it to move to X” — but when I looked at the remaining cards once we had finished that scenario, I discovered that my assumption had jumped us past many things that we should have revealed with in-game clues. Oops.

The nature of escape room games is fascinating in that you start with the rules of how they work and a (possibly vague) goal, with all the stuff between your starting point and that goal being a foggy muddle, yet after you finish, you realize (yet again) that exactly one path existed between that starting point and that goal. You just had to do the work of sweeping that path clean, then following it.

Spread the loveby W. Eric Martin The composition of the U.S. Supreme Court following the death of Justice Ruth Bader Ginsburg is a topic that’s received lots of airtime over

Spread the loveby Ian Bach Merlin’s Beast Hunt is a card-and-dice game that presents a novel mechanism: the dice-card combo. My name is Ian Bach, and I am the designer