Get Together for Descent: Legends of the Dark in Q2 2021 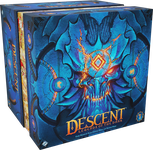 During its 2020 Gen Con Online In-Flight report, U.S. publisher Fantasy Flight Games teased a new take on its well-loved game Descent: Journeys in the Dark, which debuted in 2012.

At the start of SPIEL.digital 2020, FFG published a thorough overview of Descent: Legends of the Dark, which I’m finally getting to now that the online event has stopped eating my work hours.

Descent: Legends of the Dark — which is designed by Kara Centell-Dunk and Nathan I. Hajek and suitable for 1-4 players — follows the model that FFG adopted for its second edition of Mansions of Madness in 2018. Instead of having one player in control of the forces that oppose the team of all the other players, these opposing forces will now be controlled by an app that handles lots of game details, allowing for fully co-operative gameplay. (FFG also used this game model in 2019’s The Lord of the Rings: Journeys in Middle-earth.)

Here’s an overview of the setting and gameplay to be found in Descent: Legends of the Dark, which will be released in Q2 2021:
Terrinoth is in peril. The demon-tainted Uthuk Y’llan barbarians stalk the realm and the undead servants of Waiqar the Undying venture beyond their borders for the first time in memory. The leaders of Terrinoth are divided and fractious, unable to unite against these common threats. And in the northern barony of Forthyn, the stage is set for the next great confrontation between Terrinoth and the forces of darkness…

For years, your journeys have taken you across the fantasy realm of Terrinoth, venturing into dark forests, shadowy cities, ancient crypts, and misty swamps — but your true legend is about to begin.

Forge your own legend together with friends as you adventure across the vibrant fantasy realm of Terrinoth in the co-operative dungeon-crawling board game Descent: Legends of the Dark. Powered by an integrated free companion app, Descent: Legends of the Dark puts you in the role of a budding hero with their own playstyle and abilities. Together with your unlikely companions, you’ll begin an unexpected adventure — an adventure told across the sixteen quests of the “Blood and Flame” campaign. Throughout your campaign, you’ll face undead lurking in the mists, demonic barbarians stalking the wilds, and even more terrifying threats. With 46 pieces of 3D terrain and forty hero and monster miniatures to draw you into the game, your greatest adventure is yet before you! Your objectives will change from quest to quest as you follow the overarching story of the campaign.

Gameplay is fast and intuitive. You take three actions each turn: one maneuver action and two additional actions of your choice. Maneuvering gives you movement points, as shown in the upper right corner of the character sheet, and since you always have a maneuver action, you can reposition to put yourself in a more advantageous position for attack. Other than maneuvering, you can use an action to attack an enemy, rolling your attack dice and drawing upon your hero’s abilities and weapons to deal maximum damage or inflict harmful conditions on your foes, or you may use the explore action to interact with a piece of 3D terrain or a token by using the app. You can also use your action to perform one of the most crucial actions in Legends of the Dark: the ready action, which lets you flip your hero sheet or one of your cards to its opposite side, unlocking new abilities!

Your hero sheet isn’t the only thing you can ready. Every hero also has an attack card and skill cards! Each hero starts the game with two weapon cards, which are sleeved together back-to-back to create a single attack card. Skill cards can also be readied, switching between two complementary abilities.

Hero cards
The app also brings new changes to gameplay, introducing enemies with adaptable strategies, complex status effects, and triggers fully managed by the app, and the ability to develop your heroes based on the choices you make in scenarios. You’ll also uncover a wealth of activity between scenarios, such as crafting, shopping in the city, upgrading equipment, and more. Because of these various differences, Descent: Legends of the Dark is not compatible with Descent: Journeys in the Dark and its expansions.
As in The Lord of the Rings: Journeys in Middle-earth, you might start a Legends of the Dark quest with nothing more than a single map tile, but as you take actions, the app will tell you where to place terrain, tiles, figures, and so on. As FFG writes, “Your levels will be filled with staircases up to other rooms, sturdy bookshelves, towering trees, treasure chests, barricades, doors, and statues. And all this 3D terrain isn’t just decorative: you can interact with all of it through the app, plucking valuable tomes off a moldering shelf, cracking open a booby-trapped chest, or climbing a tree to scout out the terrain ahead.”

Head to the FFG announcement for many more details and pics for Descent: Legends of the Dark.

Spread the loveby Antonio Sousa Lara Dear Diary, How the hell did this happen? Could you please tell me how a weird over-the-top dungeon brawler became a game that features…a

Spread the loveby W. Eric Martin [ImageID=5265421Paris]Let’s get back to more game preview videos from GAMA Expo 2020, a convention during which BoardGameGeek recorded more than one hundred overviews of