Getting The Crew Back Together, This Time for a Trip on Earth

German publisher KOSMOS has started to tease its early 2021 line-up, with the buzziest title likely to be Die Crew: Mission Tiefsee (Mission Deep Sea), a co-operative trick-taking game that’s a standalone sequel to Thomas Sing‘s The Crew: The Quest for Planet Nine, which won the 2020 Kennerspiel des Jahres and many other awards.

Details are sketchy — these announcements being only teases for now — but here’s what we know about this release, which like The Crew is for 3-5 players with special rules for two players:
In Die Crew: Mission Tiefsee, you and the other players are on the trail of a great secret. Do your best to lead the entire team to the destination. With each card, you dive deeper and deeper into the darkness of the deep sea. Have you completed another mission? Let’s go further!
So, more of the same? If so, that would be fine by me as my time playing The Crew during BGG.CON 2019 was the highlight of the show. (Admittedly, I spent half my waking hours at BGG.CON 2019 playing The Crew, so I had little time for anything else.)

Die Crew: Mission Tiefsee has a release date of March 1, 2021, based on listings on multiple retail sites.

Other titles teased by KOSMOS, with approximate release dates listed, include: 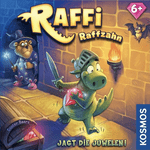 • Harry Potter: Verteidigung gegen die Dunklen Künste, which is a German edition of the two-player dueling and deck-building game Harry Potter: Hogwarts Battle – Defence Against the Dark Arts – 8 March 2021
• Welcher Dino leuchtet da? (“Which Dino Shines Here?”), a children’s game for which we have only a title – 8 March 2021
• Catan: Das Duell – Finstere & Goldene Zeiten (“Dark & Golden Times”), this being a collection of six theme sets to expand Rivals for Catan, allowing you to fend off barbarians, discover new islands, and more – 8 March 2021
• Die Geschichte vom kleinen Siebenschläfer, der nicht einschlafen konnte (“The Story of the Little Dormouse Who Couldn’t Sleep”), a children’s game by Heinz Meister – 8 March 2021
• Monster 12, which has no details other than being authored by Peter Wichmann, best known for NMBR 9 – 15 March 2021
• Ubongo! Brain Games, with this being a collection of solitaire placement puzzles by Grzegorz Rejchtman – 10 May 2021

Spread the loveby Wat This is the story of a nice story, one of those that should never end, such as a Ken Follett book or an HBO episode. I

Spread the loveby W. Eric Martin [Editor’s note: I first published this guide in December 2014, but the BGG layout and UI has changed since then, so I’ve updated this