Give Others a Gift of Tulips, and Play a Crystal-Mining Jonah in So, You’ve Been Eaten.

• Gift of Tulips is the first design from Sara Perry, with publisher Weird Giraffe Games crowdfunding this design (KS link) ahead of a Q1 2022 release date.

The game is for 2-6 players, plays in 20 minutes, and as might be expected from the title has you trying to collect things of value without knowing what the final value might be. Here’s a detailed summary of the gameplay:
In Gift of Tulips, tulip enthusiasts explore Amsterdam’s tulip festival to build colorful bouquets, give tulips to others (scoring points in the process), and manipulate the value of the market.

The deck includes tulips of four colors, with values 2-4. Lay out four festival cards based on the player count, with these cards showing the number of points scored for giving away tulips, keeping tulips, and having a majority of certain colors at the end of the game. Draw two cards of different colors, and place them under the festival cards in first and second place based on their value. Deal two cards to each player; keep one card face up in front of you and add the other face down to the “secret festival” pile.

On a turn, draw a card from the deck and KEEP/GIVE/ADD it, then draw a second card and take one of the actions you didn’t just take. The actions:

—KEEP: Place the card face up in front of you, scoring points for it if that color is currently ranked third or fourth in the festival.
—GIVE: Give the card to another player, who places it face up in front of themselves; you score “giving” points based on the current ranking of that color in the festival, plus points equal to the value of that tulip.
—ADD: Place the card face down in the secret festival or add it face up to the festival, altering the ranking of colors if needed so that the color with the highest sum is first, etc.

Image: Eric Yurko
For the three highest ranked colors in the festival, whoever has the most and secondmost cards in these colors scores points as listed on the festival cards; in games with five and six players, the player with the thirdmost cards of a color also scores points. In case of a tie for card count, the tied player with the higher value of a color wins that tie. Whoever has the most points wins. 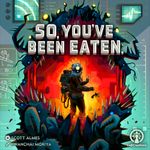 • Another title being crowdfunded at the moment is So, You’ve Been Eaten., a 0-2 player game from Scott Almes and LudiCreations (KS link) that was originally going to be available at SPIEL ’19, but which didn’t make it in time, then things happened, and here we are. Let’s just say that the game took its time going through the development track and has now emerged at the other end.

The description below is light on gameplay details, but the introductory material might tell you all that you need to know about the game:
So, you’ve been eaten.

Don’t worry, this is simply an occupational hazard. In fact, it is fairly common among Deep Space Miners (5th class), and some say that it is almost unavoidable. And, well, it is. Especially since the crystals that you seek happen to be inside giant space beasts. To mine them, you need to, well, be eaten.

But, no reason to panic. We are here to help you deal with the physical and mental challenges of being eaten. This handy simulation/survival guide is standard issue for all recruits and will eventually lead to a productive, if not potentially brief, career in space mining.

Should you achieve your objective and mine enough crystals to meet your quota, it is then cost-effective for the company to activate your jet pack and extricate you from the proverbial belly of the beast. While the beast’s immune response was not enough to prevent its demise, its contribution to human progress and corporate profitability are most definitely appreciated.

In the eventuality that the bacteria present in the beast overwhelm you and you are digested, do not worry. Your non-organic parts will ultimately provide much utility to future space miners. In fact, you may encounter some such pieces of equipment in your expedition, remains of attempts by evidently less-than-qualified recruits.

Finally, it could transpire that you do not collect the necessary crystals by the time you reach the end of the beast’s digestive tract. In this case — the so-called “ending #2” — you will then exit the beast from the other end than the one you entered: alive, yet forever changed. In this case, and after a thorough decontamination and quarantine period, we will have to evaluate your performance versus that of the beast’s efforts to consume you.

The Miner wins instantly by collecting all eight different crystals, and the Beast wins instantly by digesting the Miner after the attack of four bacteria of the same type. Of course, there’s always the possibility that the Miner will simply pass through the Beast’s system, in which case the player with the most points wins!

Spread the loveby W. Eric Martin Time to survey the games coming in the latter half of 2020 from German publisher KOSMOS, starting with Anno 1800, an adaptation of the