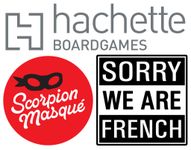 In February 2019, I wrote about how Hachette Livre, the largest book publisher in France and the owner of the Hachette Book Group in the U.S., was taking steps to purchase French game publisher Gigamic. In September 2019, I noted that Hachette had founded two new games studios: Studio H and Funnyfox, with the former focusing more on games for the hobby market and the latter on games for the mainstream market. And in October 2019, Hachette purchased distributor Blackrock Games, which has a 400-product catalogue and handles roughly 90 new releases each year.

Well, time to add two more publishers to the Hachette Boardgames umbrella. At the start of February 2021, Hachette acquired publisher Sorry We Are French, which was founded in 2018 by Emmanuel Beltrando, who (according to the article linked to above) will continue to lead SWAF “in order to pursue its development in the creative autonomy specific to the brands of the Hachette Livre group”.

Today, March 1, 2021, Canadian publisher Scorpion Masqué announced its acquisition by Hachette Boardgames. In a Facebook post, Scorpion Masqué founder Christian Lemay states that the entire six-person team will stay in place. Moreover:
Le Scorpion Masqué was at a crucial stage of its growth. With the success of recent years, the management and administration tasks have become heavier and it slowed down the development of our games. The arrival of the Hachette group helps to solve this problem.

On a more personal note, as the Grand Boubou, I will be able to devote myself only to my passion: game development. That’s why I created Scorpion Masqué after all. Our games will be even more pampered before landing on your tables, and this is very good news!
Speaking of the publisher’s “success of recent years”, I highly recommend reading Scorpion Masqué’s “2020 Year-End Review“, which was published on February 10, 2021. The post details the challenges related to the games it released in 2020 — including one on Friday the 13th of March, the day prior to the first lockdown in France and Québec — and how the game market has been affected by the pandemic. An excerpt: 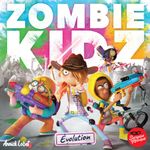 Lastly, people don’t buy the same things online as they do in stores. I don’t have any serious studies to back up this claim, but the inquiries I made to numerous game stores were useful in confirming what Manuel (our Creative Director) and I had suspected at the beginning of the current crisis. Generally speaking (and yes, there are exceptions as always) consumers will buy a product online that they already know. You already know what game you want to buy when you go online, instead of walking into a brick-and-mortar store looking to poke around a bit, to discover new things, to be reminded of games you’ve heard of, or to get the recommendations from a well-informed staff member who will confidently place a copy of Master Word into your hands. Online, consumers will buy something they know; a classic like Uno, Sorry, or Monopoly; or a game that has created enormous buzz, like Azul, The Crew, Pandemic, Codenames…

In that post, Scorpion Masqué also teased its 2021 releases, starting with the party game Olé Guacamole! by designer Guillaume Sandance, which challenges you to say words that don’t contain certain letters — “8 seconds of rules for 15 minutes of fun”, in the publisher’s assessment — followed by a French-only second edition of a game in its Decrypto/Stay Cool/Master Word line, followed by a game in its Zombie Kidz universe: “the much-rumored racing game with the sightless driver”.

Spread the loveby W. Eric Martin • Gamers Geekery & Tavern is a board game café that opened in July 2019 in Cary, North Carolina — just one town over

Spread the loveby W. Eric Martin • As the COVID-19 vaccinations continue to roll out in countries around the world, Tokyo Game Market is one of the few game events

Spread the loveby Candice Harris Keith Matejka‘s Roll Player began in 2016 as a puzzly, dice-drafting, fantasy character-building game and has since evolved into a full-on series with its expansions