Interview: Phil Walker-Harding Looks Back on His Career 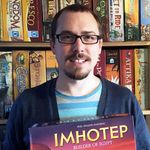 [Editor’s note: This interview was first published on Diagonal Move on September 25, 2020. —WEM]

Phil Walker-Harding, designer of Sushi Go!, Bärenpark and Gizmos joins Neil Bunker from Diagonal Move to look back on his career to date.

DM: Hi, Phil, thank you for joining us today. You are one of the most successful game designers working today, with numerous commercially successful titles and many critical awards to your name — yet you started by selling small, self-published card games. Please can you tell us about those early days of your career?

PWH: When I got into modern board games, particularly those coming out of Germany like Catan and Carcassonne, I immediately wanted to design my own! I played lots of games growing up and had even tried making my own as a child, so it was quite natural to take it back up as a hobby.

Way back before Kickstarter revolutionized the way games are funded, marketed, and even produced, self-publishing was a very different thing. My first few releases were hand-assembled in very small print runs. I sold them online and at small local conventions, so it felt like a very small DIY beginning!

Archaeology: The Card Game was picked up by Z-Man Games, and I gradually built up my name from there. Around five years ago, I decided to fully focus on designing and working with other publishers. 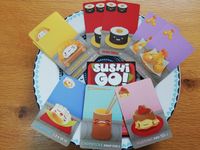 DM: Sushi Go!, in 2013, was your breakthrough game. When did you realize that you had a hit, and how did it feel to achieve that success?

PWH: It was a bit of a gradual thing because the first edition of Sushi Go! was self-published, so there wasn’t a big audience right away.

Gamewright signed the game a little bit after that, so I knew it would be marketed far more widely, but you never know how successful a game will be out in the market. I suppose I realized how well it was doing about a year after it was out and I saw a whole lot of people playing it all around the world on social media.

It was a great feeling as it had been a real aim of mine to create a popular family-friendly little card game. 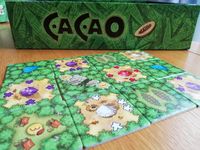 DM: Cacao followed in 2015. It features a combined tile and worker placement mechanism. How did the mechanism and the overall game develop from the initial idea to fully formed game?

PWH: Cacao evolved from another design — a card game all about surrounding scoring cards with your cards in order to achieve majorities, so very much like the temple tiles in the finished game.

At some point I tried having your scoring cards trigger immediate actions. This worked so well I made this the whole focus of the game, and the rest of the design followed quite quickly.

I then entered the design in the [2012] Premio Archimede competition, and from there it found a great publisher in ABACUSSPIELE. 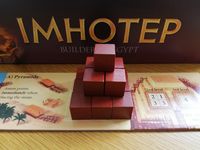 DM: Imhotep was nominated for the Spiel des Jahres in 2016. What effect did this have on your career? Did you experience an increased sense of expectation for the releases that followed?

PWH: I did feel that more people knew who I was after the nomination, although probably more within the industry rather than general gamers. It did lead to new contacts and relationships with publishers. I am sure it did help my recognition generally as a designer, but this is something that has slowly grown since I began, I would say.

DM: Many of your games, including the popular Bärenpark, incorporate mechanisms seen in far more complex games, yet are accessible to players of all ages and experience. Is this accessibility intentional and, if so, how do you achieve this aim?

PWH: Yes, it is definitely an aim. One of the best things about our hobby is that it can bring people of all ages and backgrounds together around the table.

I try to make my designs as easy to approach as possible. How exactly you achieve this is a hard thing to quantify exactly, but I do have a few principles I stick to.

For example, the game should take five minutes or less to teach, and the results of the players’ actions should have immediate feedback so that they know and feel what they have achieved.

Theme and graphic design also play a big part, so I try to make this a priority in my discussions with my publishers.

DM: Gizmos was another big success. Do engine-building games — with their multiple layers, effect combos and variable routes to victory — require a greater degree of development than some other genres? How do you approach this from a design perspective?

PWH: Engine-building games like Gizmos do have certain complexities about them, yes. Because the powers that the player gains persist for the whole game, balancing them against each other becomes very important.

In Gizmos, it was important that each card was costed correctly so that all the different paths to victory remained viable. I was greatly helped by Marco at CMON in this area. He has a background in collectible card games, so had lots of great insights about balancing and costing cards.

DM: For all the success that many of your games have seen, some games remain less well known (Gingerbread House, Silver & Gold, Pack of Heroes). What factors do you think have contributed to the success of some games over others?

PWH: It is a hard thing for me to have full insight into! Some games are just better than others, but also there are all sorts of factors in the market when a game is a released that can factor into its success: Did the game stick out as different and original when it first came out, or did it get lost in the crowd? Was there good early buzz about the game, or did the marketing not quite land with the right audience?

With so many games being released each year, it is getting harder to stand out. Personally, I try to release fewer games that I am really happy with, but of course even then they can’t all be hits!

DM: You have had the opportunity to revisit older games including Archaeology and Dungeon Raiders? How do you feel when revising past projects with the benefit of experience, and is there one that you would like to revisit if you could?

PWH: It was a great opportunity to revisit both of those designs for new editions. I was really thankful to be given that chance by Z-Man Games and Devir.

I definitely felt my experience gave me some ability to knock some of the rough edges off my older designs, so in both cases I felt I could clean them up a little. However, both games already had a bit of an audience and a core mechanism that was working, so I didn’t want to completely overhaul them.

Also, it was interesting to see which design choices I made back then that I would not make now that were actually probably the right fit for the design.

DM: Which game do you look back on and think “I’m glad I did that” and why?

PWH: Designing all the different types of cards in Sushi Go Party! was a real challenge, and at points I was not sure if I could make it work, but I am really glad I kept at it and finished the design. I think it was a great learning process for me as a designer, and the game has really helped keep the Sushi Go! line going.

DM: Do you have any design or publishing advice to share with readers?

PWH: I often say to new designers to just get your first design out there. Making your game available through print-and-play, GameCrafter, or an online design competition is a great way to get a whole lot of eyes on your work.

And it is okay if your first designs aren’t fantastic because you will learn from each game you make, and the feedback you get from players will be invaluable as you progress!

Tags: back, card, design, first, game, games, great, some, there, your

Spread the loveby Saigo Editor’s note: Game Market took place in Tokyo on November 23-24, 2019, and Saigo — who translates game rules between Japanese and English and who tweets

Spread the loveby W. Eric Martin Let me start this round-up of Japanese games with a shout-out to Jon Power (username: EYE of NiGHT), who since 2015 has been overseeing

Spread the loveby W. Eric Martin • Following the May 18 announcement of the 2020 Spiel des Jahres nominees, jury member Udo Bartsch has written an article that explains why