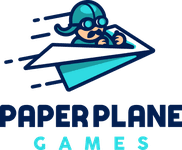 • Designer Uwe Rosenberg used to have fairly consistent partners for his work: AMIGO for Bohnanza titles, Lookout for big-box games, and Feuerland for even bigger games.

Yet Rosenberg has been creating so many games that he’s been branching out to other publishers, publishers that launch their existence with his creations, such as Edition Spielwiese in 2016 with Cottage Garden (as well as his Nova Luna at SPIEL ’19), Wyrmgold in 2019 with Robin of Locksley, and Canadian publisher Paper Plane Games in March 2020 with the 1-2 player game Fairy Trails.

In Fairy Trails, one player represents elves, the other gnomes, and you want to give your creatures completed homes first in order to win. One tile starts face up on the table, while each player has a hand of two tiles. On a turn, you place one tile adjacent to one or more tiles already in play, and the edge of each tile contains paths in pink (for elves) and yellow (gnomes), although often these paths terminate on tiles instead of continuing onward. When you close one of your paths, whether by creating a loop or by terminating all of the branches, you mark all of the home spaces along that path with one of your markers — and whoever places all of their markers first wins. 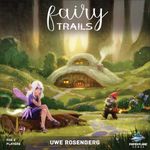 In the solo game, you place tiles one at a time (instead of having a hand), and you must place at least one house on the board each turn starting with the fourth tile in play, ideally giving everyone a home before the paths lead you astray.

• UK publisher Osprey Games has announced a few of its 2020 releases, with Undaunted: North Africa from Trevor Benjamin and David Thompson being a standalone sequel to 2019’s Undaunted: Normandy. Here’s an overview of this May 2020 two-player release:
The North African campaign has begun. Take control of the British Army’s Long Range Desert Group and operate behind enemy lines or command the formidable Italian forces opposing them. In Undaunted: North Africa, players once again lead their sides through a varied series of missions. As casualties mount, wounded soldiers leave the players’ decks, forcing them to adapt in the face of changing tactical circumstances. Use your cards to strengthen your forces, deploy vehicles to advance rapidly across the battlefield, and seize the initiative as you determine the outcome of the North African Theater.

• That title will be preceded in February 2020 by Letterpress from Robin David, a 1-6 player game that has this somewhat vague description:
Johannes Gutenberg has given us letterpress printing, but it’s up to you to master it!

Compete with your rival wordsmiths in Letterpress to craft the most impressive words and win first pick of letters to add to your collection. Choose wisely, for you will find any you leave in the words of your opponents, and the player who uses their stored letters to greatest effect will spell victory.

• In November 2017, L4 Studios funded a Kickstarter for KAPOW!, a dice-building game of superhero (and supervillain) combat from Larry Bogucki, Douglas Hettrick, and Carl Van Ostrand that was fulfilled in early 2019 through publisher 2 Ton Porcupine.

At SPIEL ’19, White Wizard Games announced that it had picked up the title and would be relaunching it as a White Wizard title in 2020, with the game universe being expanded with more characters through a partnership with 2 Ton Porcupine. In a press release announcing the deal, White Wizard’s Rob Dougherty said, “KAPOW! is super fun, easy to learn, and also has great strategy and tons of replayability, so it is a natural fit for our portfolio of games.”

We talked with Dougherty about the game and White Wizard’s new involvement with it at SPIEL ’19:

Spread the loveby W. Eric Martin Was this post title a stretch? Indeed it was, but I made that stretch anyway for whatever payoff it might have provided you, which

Spread the loveby W. Eric Martin Whenever I research a Japanese game that isn’t yet in the BGG database, I inevitably discover a half-dozen more such games along the way,

Spread the loveby W. Eric Martin I’ve already discussed my love of The Mind in great detail in this space, and now I’m back eighteen months later to express similar