Protect Lakeview from Monsters and Take Control of a Flooded Europe 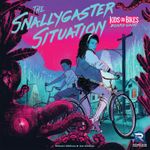 • U.S. publisher Renegade Game Studios debuted its RPG line in 2018 with Overlight and Kids on Bikes, the latter of which won a 2019 ENnie for “best family game for Renegade and designers Jonathan Gilmour and Doug Levandowski.

The Kids on Bikes game line has since expanded with Kids on Brooms and Teens in Space, and in Q2 2021 it will be joined by The Snallygaster Situation, a board game from Gilmour and Michael Addison set in the world of Kids on Bikes. Here’s an overview of this 2-5 player game that plays in 45-60 minutes:
Something is very wrong in Lakeview. You know it, but nobody believes you, especially not the “adults” who dismiss you for being a kid. You’ve lived here your whole life, but it was only a little while ago that you started to notice the strange sounds at night, and now the new kid at school has vanished. You’re sure that a hideous creature has been unleashed on your town — and it’s up to you to defeat it!

In the co-operative game The Snallygaster Situation, which is based on the Kids on Bikes RPG, you and your best friends must face off against one of four diabolical monsters set on destroying Lakeview — and possibly the entire world! Get on your bikes to search for clues about the monster’s weakness, find the missing kid it has abducted, and end the threat to your hometown. Oh, and watch out for the Federal agents because they can put a real damper on your epic adventure.

In more detail, one player takes the role of the Lost Kid, selecting a card to play each turn that provides clues about their location such as street names, buildings, or landmarks — but the card also dictates how the monsters and the Feds move and attack on the board. You might have the perfect clue to give, but then the monster will attack one of your friends, sending them back to the treehouse and advancing the “doom marker”, i.e., the game’s timer.

The other players are trying to defeat the monster and save their friend. On their turns, they use their rides — skateboard, dirt bike, inline skates, etc. — to search the town, look for clues, use special item cards, and avoid the monster, which might be the Jersey Devil, a Dover Demon, Bloody Mary, or (of course) the Snallygaster. Each monster has a different level of difficulty with unique gameplay elements.

Once the Lost Kid is found, they join their friends to try to defeat the monster. 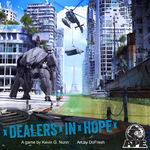 • During BGG@Home, U.S. publisher APE Games was testing several upcoming games on Tabletopia ahead of Kickstarter campaigns to fund them, with one of those games being Kevin G. Nunn‘s Dealers in Hope, a 3-5 player game that plays in 90-150 minutes.

You can find preliminary rules for the game here (PDF), but this is overview of the setting and gameplay:
Sea levels have risen, causing severe land and resource shortages. Europe has erupted in war, and it’s up to you to salvage what is left for your people.

Dealers in Hope, set in approximately 2170, is a deck-building game of conflict. As faction leaders, players vie for control of a future Europe that is a shell of its former glory. Build a deck that matches your faction’s play style and take back the continent!

Each player controls a different faction leader with unique abilities and a unique starting deck. The leader you choose determines how you score victory points to win the game. Regardless, all leaders score a bulk of their points through conquest. On your turn, select an action by placing one of your tokens on the action board. Actions fall into one of three categories: Train (add cards to your deck), Reorganize (manipulate your deck), and Assault (attack territories). Action slots are limited, so it is essential to plan ahead and guess your opponents’ moves.

Dealers in Hope uses several types of cards, with some types, i.e., professional cards, being selected randomly and others coming from the game’s preset deck suggestions. Each set of professional cards has three levels — level 1, level 2, and master — and you must Train these increasingly powerful cards in order. Battles are fought via back-and-forth card play. Cards contain attack, defense, support, and (often) effects. The attacker plays as many cards as desired from their hand, then the defender gets a single chance to play cards in defense. Finally, the attacker gets one more chance to beat the defender. The winner gains/holds the territory, along with bonuses associated with that territory.

Non-final game board art
Unlike many games of this type, Dealers in Hope focuses not only on the military side of warfare, but also on the people behind the scenes: the civilians, masses, etc. who affect and are affected by the campaign. 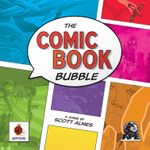 • Other titles being tested by APE Games include The Comic Book Bubble, a 2-6 player design from Scott Almes in which you try to buy and sell comics at the right time to profit from that market, and One Card Wonder, a design from Nat Levan that I first wrote about in 2016.

For those who don’t recall that write-up from four years ago, here it is again, on the assumption that the game has not fundamentally changed:
In One Card Wonder, each player receives a card that shows a wonder of the ancient world and a set of support buildings. The multiple stages of the wonder must be built from the ground up, while the buildings may be built in any order. Players have four worker meeples and a personal supply of resources, and a general supply of resources also exists. The resource supply bag moves from player to player to indicate who is the active player.

On a turn, you take one of four actions. You may draw three cubes from the cloth supply bag, then add one to your personal supply, placing the other two in the general supply. You may take all resources of one type from the general supply. (You may hold only eight resources at a time in your supply, so if after drawing or taking you have more than eight resources, you must return some to the general supply.) You may build a level of the wonder or a building by paying its resource cost from your supply; your workers mark individual buildings as you build them, unlocking abilities. Finally, you may sell pairs of matching goods to the supply in exchange for coins. Coins can be used as a wild resource, but they also appear in the cost of some wonders. Resources sold or used to build are returned to the supply bag. 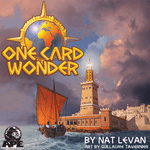 In games of four or more players, players may also trade. Trading occurs off-turn, that is, it can involve anyone except the active player. You may negotiate and trade freely with other players, but you must stop negotiating once you receive the supply bag and become the active player. The longer you spend on your turn, the more opportunity your opponents have to make deals.

The first player to complete their wonder wins!

Spread the loveby W. Eric Martin • I started exploring the world of designer games in 2000 and 2001, thanks partly to me attending Mensa Mind Games. (I was a

Spread the loveby Candice Harris There seems to be some kind of link between trains and board games, but I’ve never really understood the connection. Eric has already mentioned a