Keith and Thunderworks Games kindly hooked me up with a copy of Fiends & Familiars, the newest expansion for Roll Player, so I could do some serious character building and monster killing.

If you’re not already hip to Roll Player, let me start by giving you a brief overview of what this dice-driven game for 1-4 players (1-5 with the expansions) is all about. In Roll Player, you are competing to create the greatest fantasy adventurer and prepare your character for an epic quest. Along the way you’ll get to stuff your hand into a sack filled with a ton of colorful dice that will be used to develop your characters for the game. Each player gets their own character sheet and a unique backstory, alignment, and class that grants you a special ability and target goals for each of your character’s attributes.

Each round, you roll and draft dice to be placed on your character sheet to build up your character’s attributes. Whenever you place a die, you can trigger an attribute action depending on the row in which you’ve place it. For example, placing a die in your strength row lets you flip a die (including the one you just place) on its opposite side. When placing dice, you’re trying to hit target goals for each attribute based on your class card, while also trying to match colors in certain positions corresponding to your backstory card. The better you do this, the more reputation stars you earn. Whoever has the most reputation stars at the end of the game wins. 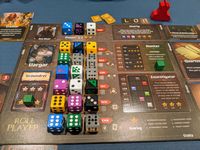 You also get the opportunity to buy market cards that could be skills and weapons that grant you special abilities or traits with endgame scoring opportunities. There’s also some set collection with different types of armor you can buy for your character. It’s a nice blend of thinky puzzle mixed with creativity since the character you’re building will be unique from your opponents.

In 2018, Thunderworks Games released Monsters & Minions, the first expansion for Roll Player. With the addition of monsters and minions, Roll Player elevated to a new level giving players more options, adding components for a fifth player, and making the game a more exciting experience since the character you’re building will also combat minions and a monster at the end of the game to hopefully earn you more reputation stars. Monsters & Minions also ramped up the game’s complexity a hair, which I am totally cool with. You have the usual fun puzzle aspect, but you also have an added choice during the market phase of fighting a minion to possibly gain experience (XP), honor, and (perhaps most importantly) insight on the monster you’ll be pitted against at the end of the game.

The Fiends & Familiars expansion, which was released in June 2020, seamlessly builds from where the Monsters & Minions expansion left off, with even more depth and the addition of fiends and familiars, special split dice, more cards, character sheets, and components. You can play the Fiends & Familiars expansion with just the base game or as recommended in the rulebook, with the base game and the Monsters & Minions expansion.

Fiends & Familiars comes with fifteen different familiar boards that represent friendly companions, each with their own backstory and a unique power that gets activated when you place dice on it. Each familiar board sits above the standard character boards and gives players more ways to earn reputation stars.

On the left side of the familiar boards is a slot for new scroll cards that represent powerful, ancient spells. Scroll cards can be purchased in the card market and give players an immediate one-time effect. Players typically save these cards since some game effects refer to scroll cards.

Familiar Board examples
On the right side of the familiar board is a slot for new fiend cards that are not so nice, as you’d imagine. The fiends represent creatures that have infested the kingdom, and in terms of gameplay, will be making it more challenging for players to achieve their goals. Each round, fiend cards will be on some of the initiative cards that hold the higher value dice.

When players draft a die from an initiative card that has a fiend, they acquire that fiend. Have no fear as it is possible to banish fiends by spending gold or charisma tokens. Some of the fiends force you to pay more gold for certain types of cards, take injury tokens when performing certain actions, prevent you from using effects of skill or weapons cards, or even force you to hunt during the market phase instead of buying cards, something I unfortunately experienced with the Fiend of Duress.

As if it weren’t tough enough deciding which die to draft when you’re thinking about the value, or the color, or even your turn order for the market phase, now these bloody fiend cards create even tougher decisions when drafting dice. You also have to consider whether it’s worth taking a higher value die along with a hindering fiend. Maybe certain fiends won’t impact you much, but trust me, others will. The good news is that it’s not too hard to banish those suckers so they’re no longer in effect, although it can become costly to banish them if you end up accumulating several. In my case, though, I snagged the Exalted trait card that gave me a reputation star for every two banished fiend cards I had at the end of the game. With this trait, I was practically incentivized to take more fiends, but also keep up with banishing them.

The new split dice that come in the Fiends & Familiars expansion are pretty cool. The Monsters & Minions expansion added new clear boost dice that ranged from 3 to 8, which was super helpful in terms of value, but not at all colorwise. Fiends & Familiars, on the other hand, comes with these funky, split-colored dice that count as both colors wherever they’re placed. To balance out this helpful feature, the split dice range from only 1 to 4. Consequently, it’ll be a lot harder to hit those higher attribute goals with these puppies, but you’ll likely do better with your main character and familiar’s backstory scoring. It does take some getting used to the multicolored pips, but I can always appreciate special, custom dice.

I should also mention you can play Roll Player solo, and it’s pretty fun. I prefer playing multiplayer, but I find the solo mode scratches the same puzzly itch, which I enjoy. I just miss some of the player interaction, especially with the dice drafting, when playing solo. The game moves quickly once you’re all set up, especially if you’re not prone to heavy AP, but it does take time to get the market deck set up since you need to remove certain cards from the giant deck (if you have both expansions), in addition to the usual market deck set-up process that requires you to separate the single-dot cards from the double-dot cards. If you’re organized when you pack it up, it shouldn’t bog you down much.

The artwork from JJ Ariosa, Luis Francisco, and Lucas Ribeiro, and component quality are top notch. I especially love the art on the monster and minion cards. It all ties together well and helps make the Roll Player experience more thematic.

The Fiends & Familiars expansion is not supposed to fit in the base game box with the Monsters & Minions expansion, but I’m going to use my Tetris skills to see what I can do. I do see that Thunderworks Games offers the new expansion as a big box on its website where you can comfortably fit the base game and both expansions as an option, but these Roll Player boxes are nice quality, so it might be worthwhile to keep them all handy.

Keith Matejka and Thunderworks Games have mastered the art of variety with Roll Player and its expansions, Monsters & Minions and Fiends & Familiars. You have a ton of different character sheets to choose from with female and male sides, 15 different familiar boards, and so many character-related cards, fiend cards, market cards, adventure cards, monster cards and minion cards. So many cards! It really feels like endless combinations are possible, and while you’re running through the same phases and structure each game, it will feel different depending on what market cards and minions are revealed, the special abilities you end up with, which monster you’re fighting, etc.

If you already enjoy Roll Player, whether with or without Monsters & Minions, you will probably enjoy what the Fiends & Familiars expansion adds to the mix. If you were lukewarm after playing the base game alone, I think you should give it another shot with either or both of the expansions. While I’d still probably only play the base game with more casual gamers, I think gamers who prefer a bit more meat on the bone will dig everything the Fiends & Familiars expansion has to offer. I’m pumped to see what Keith Matejka cooks up next for Roll Player, although with all of the existing content, I don’t think I’d ever get bored…

Spread the loveby W. Eric Martin Polish game publisher Go On Board has announced a deal with video game developer CD Projekt RED to release a new board game set

Spread the loveby W. Eric Martin Non-final boxAt Spielwarenmesse 2020, as at most conventions, I played very few games as work crowded out almost everything other than eating, sleeping, and