Solitaire Sunday: You Got Chocolate Fix in My Minecraft Travel Magnetic Puzzle 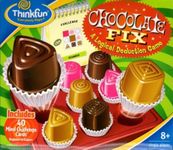 This week’s “Solitaire Sunday” is a twofer, mostly because the logic puzzles I’m covering — Chocolate Fix and Minecraft Travel Magnetic Puzzle — use the same engine underneath their hoods.

The concept is simple: Use the visual clues presented in one of the puzzle’s forty challenges to place all nine objects — which come in three colors and three shapes — into the proper spaces in the 3×3 grid. The puzzle concept comes from Mark Engelberg, with the individual challenges being created by Serhiy Grabarchuk Jr. Here are two Minecraft examples of these challenges:

Both of these puzzles are labeled as being for ages 8+, and the challenges tend to skew simpler than I would have anticipated, but publisher ThinkFun has been in business for more than thirty years, so perhaps it has a better idea of what’s appropriate for which ages than I do. For the most part, solving each puzzle from #1 to #30 took me only a couple of minutes at most, so if you’re familiar with this type of puzzle, you might also race through them as quickly as I did.

That said, I’ve owned Chocolate Fix for probably ten years at this point, and I’ve run through its puzzles multiple times over the years, bringing it out (along with other logic puzzles) to challenge my son or an exchange student with something not quite like schoolwork that can ideally still provide a specific type of learning experience. As a result, when I received a review copy of Minecraft Travel Magnetic Puzzle, I already had a background rich in this type of puzzle solving, so I was primed to tackle these forty challenges.

I then broke out Chocolate Fix to solve all the challenges once again and was pleased to discover that while the concept is the same in both puzzles, the individual challenges are unique in both, so you’re not re-purchasing the same challenges with a blocky coat of paint. The difference between the two puzzles is especially pronounced in the inclusion of “negative clues” in Minecraft, with these clues showing what cannot exist in the solution of a challenge. Here’s an example: 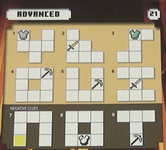 Note the YES, OUI, and NOT in the clues — clever!
ThinkFun plays up the “brain aerobics” aspect of these puzzles in its marketing copy, and while I think the science on such things is still out, I do feel it’s valuable to learn how to connect the dots in an argument to draw a valid conclusion. These challenges present extremely artificial arguments, of course, but they still function in the same manner. Grabarchuk has designed the challenges so that as you start looking at the combination of clues in one of them, you see how you can deduce some definite element of the solution — and once you add that bit of information to the clues, you can then deduce something else.

Here’s an example of a Chocolate Fix challenge that highlights how information get unlocked:

(Note that I bought this copy of the puzzle used, and the previous owner appears to have left some bits in the sun as the chocolates and “candy wrappers” no longer match in color. In later editions of this puzzle, ThinkFun used white, pink, and brown chocolates to avoid having two shades of brown. The publisher has also released a version with green (presumably mint) chocolate, and newer editions highlight that they contain “40 all new challenges”, but I don’t know whether these differ from the Minecraft puzzles or not. Someday PuzzleGeek will have all these answers, but that day is not today.) 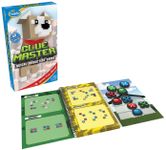 ThinkFun has also released a logic puzzle titled Clue Master from Engelberg and Grabarchuk, and the four puzzles depicted in the image above are included in Minecraft Travel Magnetic Puzzle, so perhaps they’re all the same. More open questions!

For more about these puzzles, check out this video overview:

Spread the loveby W. Eric Martin • Just ahead of GridCon, a convention run by Paul Grogan of Gaming Rules! from Nov. 29 to Dec. 1, 2019, designer Dávid Turczi‎

Spread the loveby Roman Zadorozhnyy If you add a new and good game design, old mechanisms can be revived and get a new lease of life. The best example here

Spread the loveby W. Eric Martin In 2013, German publisher alea released a new version of Andreas Seyfarth‘s Puerto Rico. As I noted in a BGG News post at the