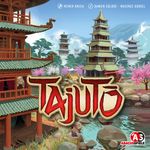 Tajuto is a big box Reiner Knizia game from French publisher Super Meeple for 2-4 players, with ABACUSSPIELE making the game available in German starting at SPIEL ’19 in late October.

The box is big primarily because of the 48 pagoda levels it contains. Pagodas come in eight colors, with each pagoda having six levels, and players will assemble pagodas during the game to acquire meditation points (MP) — the game’s currency — which they then use to take additional actions on their turn or acquire tiles that grant them additional actions, special powers, or spirituality points (SP) , which is all that matters once the game ends. (Well, the experience of the game itself matters, of course, and you still matter as a human being, and your family matters, etc., but you get what I’m saying.)

On a turn, you take all the actions you want and can pay for, and those actions are:

That’s it! Like pretty much all Knizia games, the basic elements of Tajuto are simple, but the games evolve and develop in different ways as players compete in a shared game space in which every action impacts what’s possible for everyone else in both large ways and small. 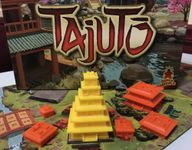 A completed pagoda and levels of another one

Each pagoda has a color-coded inauguration tile, for example, and you can spend 8 MPs to acquire one. Should that pagoda be completed — and only four pagodas will be capped at the sixth level, after which the game ends immediately — then that tile is worth 4 SPs; otherwise it’s worth nothing. In general, we’re all working toward the same goal, that is, doing our monkly duty by erecting pagodas, but as soon as someone acquires an inauguration tile, you’re like, man, I’ll burn that pagoda to the ground rather than give you a leg up toward victory. Hardly the Buddhist spirit suggested by the setting and rules, but hey, we’re still driven by animalistic desires at this point. More meditation is required…

Also, you can’t actually burn the pagodas. What’s more, should you possess a pagoda level that can be built, then you must build it at some point during your turn — although you might have a chance to rid yourself of it before that happens. Someone else might be holding the fifth green level in reserve, and the green pagoda is already up to the third level, so you buy the green inauguration tile on the assumption that it will score, but that opponent might acquire another level that can’t be played yet specifically so that they can toss that green one back in the bag (since you can hold only one level in reserve between turns).
“To live a pure unselfish life, one must count nothing as one’s own in the midst of abundance.” — Buddha, who probably preferred co-operative games

Tajuto includes six achievements that can be claimed instantly during the game by being the first to make four offerings, the first to have 5 MP, or the first to complete a pagoda as well as two achievements claimed at game end. Each of these tiles is worth only 1 SP, so you’ll want to focus on inauguration tiles and meditation tiles, the latter of which simply convert MP into SP, with the cost per SP rising the later that you buy a meditation tile from a stack. It’s easy to focus on the pagoda-building aspect of the game, on the idea of spending MP to take additional actions to gain even more MP, without ever converting all that effort into SP — which means at the end of the game you’ll have to be satisfied with having helped someone else win.

I’ve played Tajuto four times on a review copy from Super Meeple, and I talk much more about the game and how well it represents Knizia’s design style in this overview video:

Spread the loveby W. Eric Martin The year of Spirit is upon us! Lift those game pieces with your mind! While I’ll resume regular posts before you know it, I

Spread the loveby Candice Harris I don’t know whether you’ve noticed, but designer J.B. Howell has been building a diverse catalogue of solid games. I think it’s obvious when you

Spread the loveby W. Eric Martin In 2020, the BGG team spent half its time at GAMA Expo dousing ourselves with hand sanitizer and wondering why we were there. In