Take Charge as a Monarch in Brazil: Imperial, Then Explore Paper Dungeons

• While working on the BGG livestream during SPIEL.digital 2020, I missed many game announcements, and I’m still catching up on them to this day, slowly removing open tabs from my browser as I resolve them one by one.

One of those items involves Brazil: Imperial from designer Zé Mendes, a game that was first announced in 2018 as a potential crowdfunding project titled “Brazil: Mundus Imperial”. The game has been in development for a while and has now been given a SPIEL ’21 release date, with the game being released in Brazil by MeepleBR and MUNDUS and in Germany by Hans im Glück.

Here’s an overview of this 1-4 player game, which I’ve seen listed with competing playing times of 60-90 minutes and 120-150 minutes:
Take on the role of one of the great monarchs of the past, and show your valor! You will arrive in a vast and rich territory, but the road to the prosperity is filled with challenges.

In Brazil: Imperial, you need to construct buildings, manage resources, explore the land, create trade, acquire the support of the greatest personalities of the country, and recruit a powerful army to protect your interest against the rival states. If you make the right choices, you can complete missions to progress to a more advanced era, receiving new interesting options of development and victory points. In the end, the best monarch receives the title of Brazilian Emperor and constructs a new era of prosperity, enlightenment and peace!

In more detail, while playing on a modular board, you use a combination of worker placement, area majority, and individual powers to construct an empire in Brazil between the 16th and 19th centuries. You start by choosing one of the available monarchs and its personal game board and components; some monarchs are strong in combat, while others prioritize science or exploration. You receive tasks that advance you to a new era when you complete them, giving you access to more power constructions as you move into the second and third eras of the game, then you choose a starting point on the shared map. 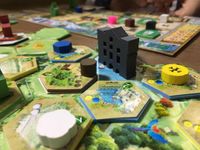 Prototype components
On each turn, you can participate in an action phase and a movement phase. You manage actions on your individual game board, and you have these seven choices:

During the movement phase, you can explore hidden places or attack other players. For combat, you check the power of the troops involved in the conflict to determine the winner, with cards being able to modify these values. Once a player completes their goals in the third era, the game ends and players tally their scores. 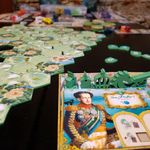 Prototype components
Brazil: Imperial was developed with the concept of it being “Euro X”, a new style of game that combines Eurogames (in which you collect and manage resources) and 4x games (in which you explore, expand, exploit and exterminate). Each game you can focus on resource management, combat, or a combination of both, depending on your choice of monarch and the interaction with other players.

• Another title out from MeepleBR is Paper Dungeons: A Dungeon Scrawler Game, a Leandro Pires design for 1-8 players that is available in Portuguese and that will probably be released in English in Q3 2021, according to distributor Alley Cat Games.

Here’s an overview:
Prepare your adventurers for a challenging dungeon exploration in Paper Dungeons, a roll-and-write game that seeks to reproduce the feel of a dungeon-crawler. 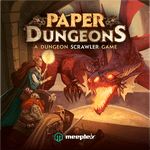 In the game, you control a classic group of medieval adventurers: warrior, wizard, cleric, and rogue. In each of the nine rounds, you select three of the six rolled dice and use these results to raise the level of your characters, produce magic items, obtain healing potions, and explore the dungeon to face challenges and collect treasure. You’ll also find three large monsters waiting in the dungeon, and you can fight them for glory.

In the end, whoever collects the most glory wins. 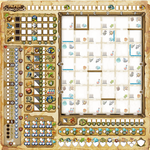 Tags: brazil, dungeon, explore, game, imperial, other, receive, while, your

Spread the loveby W. Eric Martin Whenever I research a Japanese game that isn’t yet in the BGG database, I inevitably discover a half-dozen more such games along the way,

Spread the loveby Nick Bentley I work in the board game publishing industry for North Star Games. Until recently, business has been good for publishers, due to years of rapid