Use Dice to Deliver Pizza, Avoiding a Jinx as You Create a Winning 4Mation

• I’ve already covered a few of the early 2021 releases from Austrian publisher Piatnik — Reiner Knizia’s Family Inc. here, Andrea Mezzotero’s Day & Night here, and Pencil Nose! here — but I’ve yet to cover what is possibly the most brilliantly (or awfully) named title of its line-up: Mozzaroller, from designer Jeffrey D. Allers.

Here’s an overview of this 1-4 player game:
The newly opened pizzeria “Angelo” cannot save itself from orders. As a scooter-driving pizza deliverer, it is your job to deliver these pizzas to as many customers as possible — but first the pizzas have to be topped with the right ingredients! Can you establish yourself as the customers’ favorite deliverator? 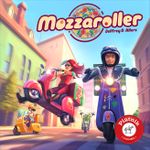 Your goal in Mozzaroller is to place dice on customer cards to complete as many orders as possible and to secure the most valuable deliverer tiles. On a turn, you roll the eight ingredient dice, then place at least one die on a matching ingredient on any customer card; if you place more than one die, you must place all dice after the first on the same customer or on adjacent ones. Next, you decide whether to:

—Re-roll with all unplaced dice
—Pass

You can re-roll as often as you want, but after each roll you must be able to place at least one ingredient on an already started customer card or a customer card adjacent to a card that already has a die on it. Fail to do this, and you must pass, losing all customers that have not had their orders fulfilled. 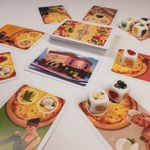 Image: @Start2game
You collect all finished customers, and if you now have the most customers of one color in front of you, you take the corresponding deliverer tile and add it to your order cards. Players continue to take turns until the draw pile is emptied, after which players tally their points.
• Yet another Piatnik title is the card-and-die game Jinx from Klaus Altenburger that players with 2-4 people and that works as follows:
Jinx is played over three rounds. At the start of each round, draw 16 cards and place them face-up; cards come in eight colors, and each color has cards numbered 1-6. On a turn, you roll the die, then optionally roll it again. After your first or second roll, you collect a card from the table that matches the number on the die. If you can’t collect a card, the round ends and if the color of a card in front of you is present among the face-up cards, then you lose that card. You might lose everything depending on how jinxed you are! 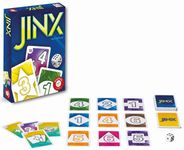 Players who lost a card receive a random bonus card for any remaining rounds. These cards have different powers such as adding or subtracting 1 from the die roll, rolling a third time, and choosing a card numbered 4-6 instead of rolling the die.

Cards that are safe in one round might be lost in a subsequent round, so ideally you can roll well or use the bonus cards to clear out troublesome colors. At the end of three rounds, players sum the cards in front of them, and whoever has the highest score wins.
• Let’s continue with another 2021 Piatnik release: Melanie Haumer‘s 4Mation, a two-player game in which you’re trying to be the first player to get four of your pieces in a row. Haven’t we seen this a hundred times? Is there a new way to do this?! 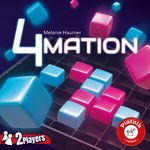 That seems to be the case given this description: Players take turns placing cubes of their own color in an empty space in the 7×7 grid — but you must place orthogonally or diagonally adjacent to the block most recently placed by the opponent. If no one creates a four-in-a-row, the game ends in a draw.

That’s it! Seems brilliantly simple and easy to try at home should you have, well, almost anything suitable at hand.

Spread the loveby W. Eric Martin Despite Gen Con 2020 being an online event that required me to travel only to the recording studio on the top floor of my

Spread the loveby W. Eric Martin • Following the May 18 announcement of the 2020 Spiel des Jahres nominees, jury member Udo Bartsch has written an article that explains why

Spread the loveby W. Eric Martin Time to survey the games coming in the latter half of 2020 from German publisher KOSMOS, starting with Anno 1800, an adaptation of the