Zip Back and Forth in TRAILS, and Hunt Humans to Satisfy The Hunger

• U.S. publisher Keymaster Games has announced a new title from Henry Audubon, designer of its 2019 hit game PARKS, with this new release having a similar look and feel thanks to artwork from the Fifty-Nine Parks Print Series, but being a standalone game for 2-4 players.

Here’s a quick overview of TRAILS, which will debut on June 20, 2021 at the U.S. retail chain Target:
In TRAILS, players hike back and forth along the trail, collecting rocks, acorns and leaves; taking pictures; and encountering wildlife to gain bonuses. At trailhead and trail end, you can turn in resources to earn badges, after which you start back in the other direction.

As players visit the trail end, the sun sets over the trail. As night falls, trail sites grant more powerful actions, but they won’t last forever. When the sun leaves the trail, the last round of play takes place, then the player with the most points from collected badges, photos taken, and bird sightings wins.
In more detail, each player starts the game with one of each resource (acorn, rock, leaf) and one badge card in hand that they can fulfill; two badges are visible at each end of the trail. On a turn, you move one or two spaces forward, then take the action of the space on which you land. If you land on the bear space, you roll the die, then move the bear and get the action of that space. Who doesn’t want to cozy up to a bear for extra action? In this game, no one! 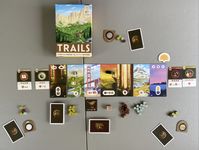 You have a canteen that you can drink to move any number of spaces, but no matter what, you must stop at the end of the trail, at which point you can spend resources to collect any of the three available badges (two visible, one in hand), after which you replace those badges. Badges often give you extra resources or actions in addition to points.

As the sun moves across the trail, the tiles flip over to reveal more powerful actions — collect two acorns instead of one, take a photo action for free instead of paying one resource — so the badge collecting tends to escalate. You have an eight-resource hand limit, so you can’t always get everything, and other players will get in your way, claiming the badge you were sure was yours.

Gotta catch that bear!
• French publisher Origames and U.S. publisher Renegade Game Studios are partnering for a new Richard Garfield design in which 2-6 players race across the land to feed on humans. No, they’re not cannibals because that would be disgusting; instead they are vampires, which somehow makes them cool. I’m not sure how that works, but here we are.

In any case, here’s an overview of this September 2021 release:
The Hunger is a race in which each vampiric player must optimize their card deck, hunt humans to gain victory points, fulfill secret missions, and eventually acquire a rose and return to the castle before sunrise. The more you hunt, the slower both you and your deck become, which will make it harder and harder to get back before daybreak. Can you become the most notorious vampire without burning to ashes at sunrise? 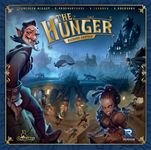 During the game, players spend “speed” to move their vampires around the map, hunt humans worth victory points, and add new cards to their deck.

The game ends at dawn, after which the surviving player with the most victory points on their cards wins!

Spread the loveby W. Eric Martin At the 2019 Festival International des Jeux in Cannes, I had the great privilege of interviewing designer Claude Leroy (video here) about a new

Spread the loveby W. Eric Martin In September 2017, I previewed Michael Kiesling‘s Azul ahead of its release, and in October 2018 I previewed Azul: Stained Glass of Sintra mere