Links: An Infamous Traffic in Profiles of Kwanchai Moriya and 10 Games 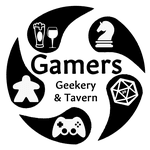 • Gamers Geekery & Tavern is a board game café that opened in July 2019 in Cary, North Carolina — just one town over from where I live! — and I still haven’t made it out to visit. For shame. The café did pick up coverage from one of our local news stations in October 2019, so good for them in getting the word out there!

• On Nov. 8, 2019, the Thai-language version of Voice of America posted a profile of artist Kwanchai Moriya that has text in Thai, but a video of Kwanchai in English giving background on his career.

• Have you been on the fence about picking up Cole Wehrle‘s An Infamous Traffic from Hollandspiele? A note of appreciation and explanation from company co-owner Tom Russell explains why you don’t have much time left to do so:
After Traffic, Cole continued to move from strength-to-strength, creating games that were both critical and commercial successes: John Company, Root, and Pax Pamir 2e. With the success of that last one, in particular, published through Cole’s own company Wehrlegig via a quarter-million dollar kickstarter campaign, Mary and I knew going into 2019 that it likely wouldn’t be in Cole’s interest to renew the license for Traffic with us when it expired. We exchanged emails about it over this summer. Cole acknowledged that he would derive much greater benefit not renewing the license, but said, essentially, “I don’t want to do anything that’s going to hurt your company. If it will help you, let’s renew.”

That was a lot of money to leave on the table like that. It was another act of kindness, and one I found deeply moving. But Mary and I didn’t want him to do that, and so are letting the license expire after this year’s Hollandays Sale.

• On The Boardgame Detective, Jeremy solicited answers from folks in the game industry for this question: “What’s a 10/10 Game to You?” I’m not sure how I’d answer this question since the titles that I’ve rated a 10 on BGG — Abluxxen, Ave Caesar, Innovation, The Mind, Pandemic Legacy: Season 1, and Qwirkle — don’t share anything in common other than me being the one who played them all. In some ways, the 10ness of those games relates to the desire of others to play them with me as that desire led me to play them more times than I likely would have otherwise, which in turn drove my appreciation for those designs.

How would you answer that question?